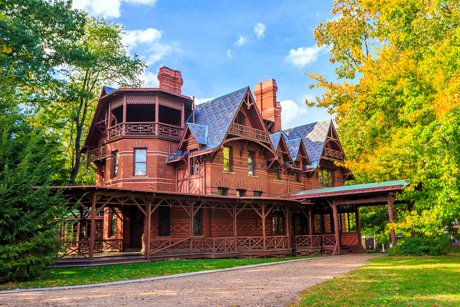 Get a glimpse of how Samuel Clemens lived on Connecticut real estate. Living History Tours at the Mark Twain House tell the tale of one of America’s greatest literary masters. A new twist on classic tours, guests are able to select someone in Samuel Clemens life to show off his home. Tours run daily and last a little over an hour. With three stories and 25 bedrooms there is quite a bit of house to go through. Guests step into the Library where stories were told, poetry read, and new projects announced. In the Victorian Conservatory plants flourished. Three daughters of the house affectionately called this room “The Jungle”. The trio spent lots of time in the Schoolroom and Nursery. Samuel Clemens' domain was the Billiard Room. Here he entertained his closest friends and kept his office.

Garbed in period dress, realistic household figures lead guests through Clemens' Connecticut property. Participants can select from a number of personalities. The newest addition to the cast of characters is daughter Susy Clemens. As the oldest girl, she knows plenty of stories about her parents and their friends. Samuel’s wife, Olivia Langdon Clemens proudly displays her home. Intimate decorating details are described and her love for the building easily comes through.

Secrets Are Revealed On Connecticut Property

Servants may be seen and not heard, and that’s how they get all the dirt. Lizzy Wells was hired as a house maid when she was just a girl. There’s no end to the secrets she’s uncovered and she’s more than happy to share. All her gossip is actually factual and told with a wink and smile. The butler runs the home and George Griffin was the man in charge. With 17 years of service under his belt he’s sure to know a thing or two. The Irish coachman, Patrick McAleer was Clemens’ highest paid servant. His dedication to his boss was absolute and so was his knowledge of intimate doings.

This magnificent representation of Victorian Connecticut real estate is simply amazing. Details in design were enhanced by Tiffany touches. Sophistication and elegance are seen throughout. Schedule a tour today. Those not sure which character they want to lead them can view a sample of the tour here. Reservations are strongly suggested and can be made by calling 860.247.0998.